The following diagram shows Open vSwitch main components and in which space (kernel, user or remote server) each component is located 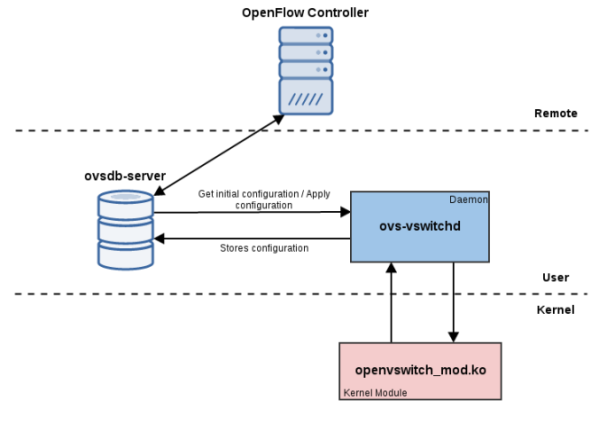 Let’s describe each one of them in more detail.

One of the core components. It is a Daemon which controls all Open vSwitch switches on the system.

When started for the first time, it gets its initial configuration from the ovsdb-server, using the OVSDB management protocol.

It communicates with the kernel module using the netlink protocol. For communication with the system, it uses netdev abstract interface.

It is also responsible for implementing switch features such as mirroring, bonding and VLANs.

A lightweight database that holds switch level configuration. Thanks to ovsdb-server, the switch configuration changes are persistent and should survive a system reboot. It Communicates with ovs-vswitchd using the OVSDB management protocol.

Handles the switching and tunneling.

When a packet arrives, it checks if there is an existing entry for it (meaning if it’s an familiar flow) if not, the packet sent to the userspace, where it processed by ovs-vswitchd.

It’s designed to be fast and simple and knows nothing of OpenFlow. OpenFlow communication is done exclusively with ovs-vswitchd.

It implements “datapaths”.   Datapath is a collection of physical or virtual ports. You can think of it as a bridge, but in the kernel and not in userspace. Each datapath can have one or more ports, which called “vports”. Datapaths are controlled with the ‘ovs-dpctl’ command (we’ll cover it in the ‘utilities’ section).

Although it’s not part of Open vSwitch components, it’s important to know what it is for since, you might have it in your environment.

All the flows kept in ovs-vswitchd will be lost in case of a restart or a crash. So to keep important flows persistent, an OpenFlow controller is usually used.

It’s common to find it installed on a remote server (that’s why it placed in different “space” in the drawing) although it can be installed on the same server.

Querying and updating the configuration of ovs-vswitchd.

A few examples (more details on OpenFlow and ovs-ofctl can be found in the OpenFlow post):

Configuring the switch kernel module. Allows to to modify, create and delete data-paths.

One of its common uses is ‘ovs-appctl fsb/show <bridge_name>’. It basically prints the MAC address table.

Creating and managing the public-key infrastructure for OpenFlow switches.

A simple OpenFlow controller that may be useful for testing (don’t use it for production).

Open vSwitch bridge can operate in either normal mode or flow mode when forwarding packets.

In normal mode, it acts as a layer 2 learning switch:

To view the MAC address table, you can use ‘ovs-appctl fdb/show’

In flow mode, things are a little bit more complex. The switch makes forwarding decisions based on OpenFlow table entries.

A switch might have one or more flow tables. A flow table can be created manually by adding flows with ‘ovs-ofctl add-flow’ command or it can be set by an OpenFlow controller (as seen in the components drawing).

I won’t go into much detail on OpenFlow, there is a dedicated post for that, but let’s describe the workflow of a packet reaching a switch which operates in flow mode: